Paul wrote his letters in the shadow of Rome. His words stood in stark contrast to Roman rule and its honor-shame culture. Join Tim and Jon in exploring the cultural context of the New Testament letters and the questions we should consider when reading these texts.

The point is that in honor-shame society, language of rank, of status, of honor, esteem—this is fundamental to the cultural worldview. It’s everywhere in the letters.

A Message with Consequences

In part one (0:00–6:15), Tim and Jon recap the series so far. The letters were written by the apostles to the early Church to help them understand how to live out the central claim of the Hebrew Scriptures and the Gospel accounts—that Jesus is the Messiah—in a variety of cultural contexts. The letters carried a religious message with political, economic, and social consequences. In this episode, Tim and Jon look at the cultural context of the Roman empire.

Power and Wealth in the Ancient Roman World

In part two (6:15–23:30), Tim and Jon begin to outline the Roman world at the time of Jesus and the apostles. Rome was in power from the 40s B.C. onward, with Greek culture largely intermixed. The good news of Caesar Augustus was spread around the world. The emperor was viewed as an incarnation of Roman power, hailed with titles of “savior” and “lord.”

Tim shares that Rome provided many modern innovations to their empire. He also shares a quote from Michael Gorman providing a broader reality.

“But there was a dark side to Rome’s ‘peace’ that cannot be forgotten… The Romans established and maintained their empire through conquest, subjugation, and intimidation. It was, in other words, peace through war, and security via domination. The Romans invaded and enslaved; they moved the conquered in and out; they formed new colonies and refounded old cities as their own colonies. They imposed taxes and tributes to maintain the empire...and its peace among the subjugated. And they had a deterrent to make sure that those who might threaten the peace understood the consequences: crucifixion.” — Michael Gorman, Apostle of the Crucified Lord, 19.

Jon asks what percentage of people got to experience the benefits of Rome and how many suffered under it. Tim shares another quote from Gorman along with an image by Gerhard E. Lenski. 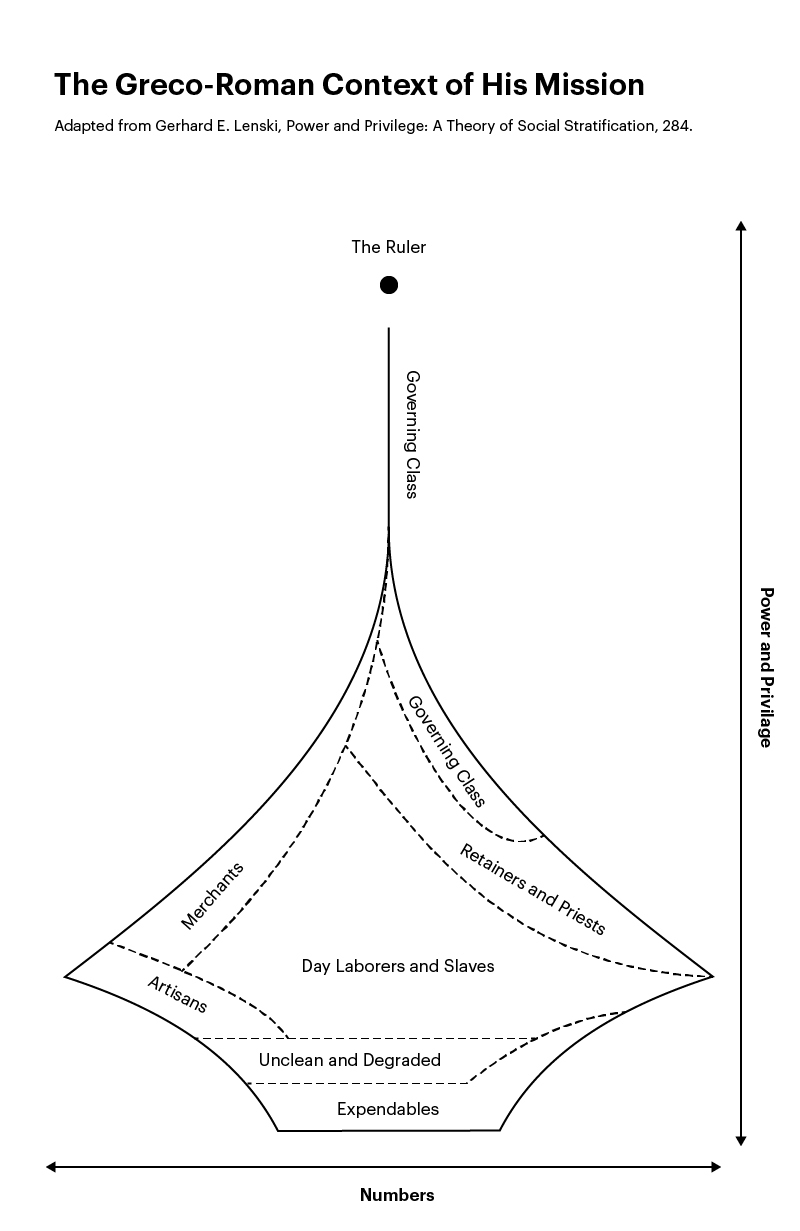 “In the [Roman] hierarchical arrangement, power was concentrated at the top… At the pinnacle was the emperor. Beneath him were the senators, then the equestrians, a class of high-ranking military and political figures, then the decurions, aristocrats with land and other forms of wealth but only local political power. Supporting this governing class was a network of ‘retainers,’ that is, political and religious officials (priests, government functionaries) who kept the machinery of power running and attended to the needs of the elite… This entire group comprised about 3 percent of the population. Further down the ‘tower’ were those of some means but little or no political power, like merchants and successful artisans. They were not like what Westerners call ‘middle-class,’ though they did exist in the middle. They constituted anywhere from 5-15 percent of the populace…. The remaining 85 percent consisted of working lower class slaves and free persons including artisans, craftsmen, merchants, and below them the working poor and day laborers. At the very bottom were the impure and the expendables, essentially those without any status, wealth, or skills to contribute value to those above them: widows, orphans, prisoners, beggars, or those with disabilities. You can see from this that for the vast majority of the population, the main priority was simply survival.” — Michael Gorman, Apostle of the Crucified Lord: A Theological Introduction to Paul and His Letters, 13-14.

Tim talks about the differences between our modern world and Rome’s ancient world. Most of the people in the ancient Roman world were simply trying to survive. These people had no wealth and no political power—no real hope of changing their fortunes in life. If that was your story, imagine hearing the news about Jesus, another king who spreads love and life to the needy. Jesus turned worldly structures of power on their head and became the servant who suffers for all.

Honor-Shame Culture and the Gospel

In part three (23:30–33:30), Tim dives into the issue of honor-shame culture in the ancient Roman world. Tim shares another Michael Gorman quote.

“Simply defined, honor and shame refer to the ongoing attribution or loss of esteem by one’s peers, family, social-class, city, and so on. In Roman society this respect was based primarily on such things as wealth, education, rhetorical skill, family pedigree, and political connections. These were the culture’s ‘status-indicators.’ In this context, ‘self-esteem’ would be conceived of as a ridiculous oxymoron, the only esteem one has is bestowed by the self but by the group… In this environment, peer pressure is not negative or something to avoid, but is viewed as appropriate and welcome.” — Michael Gorman, Apostle of the Crucified Lord: A Theological Introduction to Paul and His Letters, 13.

Tim shares that some elements of honor-shame culture still exist in the Western world, but it’s intermixed with ideas of self-esteem and personal discovery. These ideas would have seemed foreign and ridiculous to ancient viewers. To them, social status would be determined by esteem or reputation, which in Greek was the word dokeo, “to be recognized” (Grk. δοκεω). This verb is the root of the Greek noun doxa (Grk. δοξα), often translated as “glory.” Tim shares that seeing the word “honor” where the word “glory” is used has helped to shed new light on New Testament passages.

Romans 8:18-21
For I consider that the sufferings of this present time are not worthy to be compared with the glory (doxa) that is to be revealed in us. For the anxious longing of the creation waits eagerly for the revealing of the sons of God. For the creation was subjected to futility, not willingly, but because of Him who subjected it, in hope that the creation itself also will be set free from its slavery to corruption into the freedom of the glory (doxa) of the children of God.

Human ruling with God as we were created to do is the ultimate state of honor for humanity.

A Christian Understanding of Honor

In part four (33:30–40:10), Tim and Jon discuss the reality of honor-shame culture in the world of the New Testament letters.

Jon shares that some Christian traditions can downplay human glory or honor because they want to keep the focus on God’s glory and honor. Tim says that humans are designed as the image of God to rule with him—a glorious and honorable position they are given not because of their own greatness but because of the gift of God.

Tim shares another example from Philippians 2:1-11 to illustrate this and show how humans are supposed to lay down their lives for one another and give their loyalty to Jesus, thus esteeming and giving honor to God. And all who believe in Jesus are called the children of God and siblings of Jesus. Tim says this is effectively the same as saying all those who believe in Jesus are brothers and sisters of the emperor.

In part five (40:10–end), Tim and Jon pull the conversation together to talk about the tension of defining commandments versus context in the New Testament letters.

Tim says that understanding honor-shame culture helps us to see the way group values work in the New Testament. In this culture, one person’s mistakes could dishonor the entire group. Jon asks how we’re supposed to see honor-shame culture in relation to the Gospel. Tim says that the letters are showing us what the Gospel looks like applied in this culture, which means it will be harder for modern readers to understand.

Does this mean that followers of Jesus should adopt an honor-shame mindset? Tim asks a clarifying question: What is it that’s actually inspired by the Spirit here? Is it the cultural setting? Or is it the story, and I get to watch them apply in a different cultural setting? The way the Spirit works in a modern Western context will require different strategies. This is the heart of what it means to be a missionary and bring the Gospel to a different context, including where we live.

Tim says, “We have our thumb on why interpretation of the letters is such a denominationally-divisive issue in the history of the Christian tradition.” Much of our differences depend on how we appropriate the New Testament letters. A missionary mindset asks how the Gospel can both challenge and affirm aspects of our current culture and point to Jesus.

Paul’s message was incredibly disruptive to his culture because of how it put everyone on the same level before God. In our modern culture, the opposite message may be most challenging—that the Gospel challenges our individualism and calls us to be part of a family.

Letters Q+R #2  –  56m
How Much Context Do We Really Need?
56m
Previous Episode
How To Live Like Jesus Is Lord
Back to Podcast
Next Episode
The Drama We Don’t Know
For advanced bible reading tools:
Login  or  Join
Elige qué idioma te gustaría.