How Do God’s Words Create?

John draws from all three of these sources in his opening words, and as we understand each source more, we can better understand the prologue of John 1:1-18.

Genesis 1:1 says, “In the beginning, God created the heavens and the earth.” How did he do it? As we continue reading, we learn that God said, “Let there be light.” From there, a divine act of speech introduces a new day of creation. And since the third and sixth days include three additional moments when God speaks, the phrase “God said” is repeated a total of 10 times to describe the creation of the cosmos. So what does this mean, and how does this help us understand John’s introduction?

Speech is a human act, requiring a physical body. The author of Genesis understands God as a purely spiritual being, though, and he still tells us that God “said” things. Describing God with human characteristics is an example of an “anthropomorphism,” which is when authors use human characteristics or descriptions to talk about non-human things or beings. This example from Genesis 1 is the first anthropomorphism in the Bible, and John refers back to it in the opening of his Gospel. Somehow, God is using speech to create everything that has been made.

So let’s consider the significance of speech. God could have nodded, or blinked, or motioned with his hand, but instead he is described as speaking. Words express the mind, will, and character of a person. Words reveal identity. We can observe much about a person based on what we see, but we can’t begin to know them personally until they speak to us. When God created the universe, he spoke it into existence. “The Word became flesh” (John 1:14).

Creation begins with God speaking, and then a new creation begins when this speaking “Word” of God becomes a human being in the flesh, the living and active person of Jesus. As John says, “In him was life, and that life was the light of humanity” (John 1:4).

The Word of God in Psalms and Proverbs

While Genesis 1 introduces the divine person and creative speech of God, the books of Psalms and Proverbs explore this idea in greater depth. The key words and images of Genesis 1:1-3 are hyperlinked in multiple places throughout Proverbs and Psalms.

John’s introduction of Jesus reflects a deep understanding of these passages and shows us how he interprets them. For example, a comparison of John 1:3 to Proverbs 3:19, Proverbs 8:22-23, Proverbs 8:30, and Psalm 33:6 can help us understand how John saw Jesus as the embodiment of wisdom. Before God’s word became human in Jesus, he was the wisdom who laid the foundations of the earth. He sets the heavens in place, fashions the stars, and actively lives at God’s side. 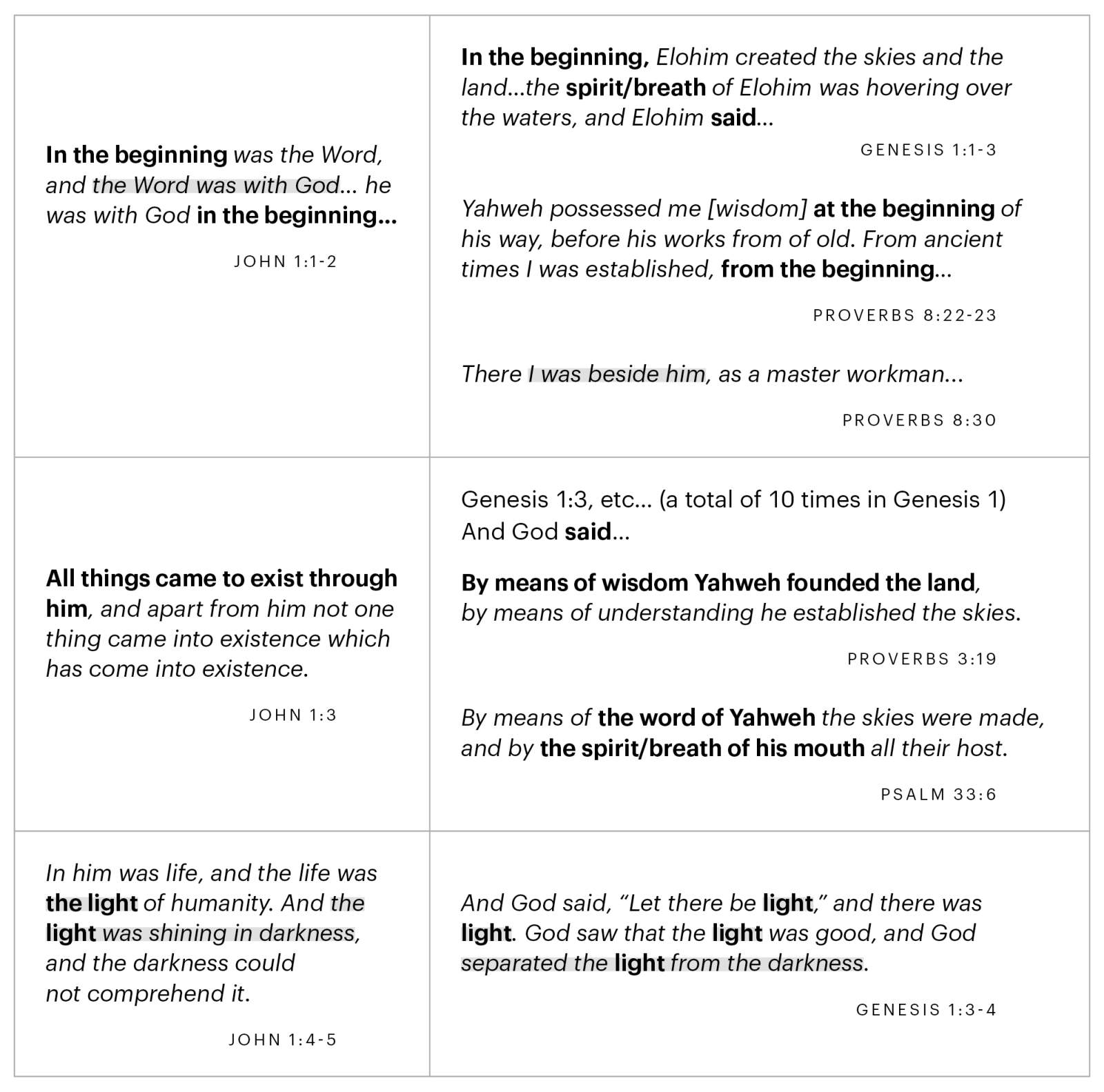 The Word of God in Jewish and Greek Literature

John was not the only one who saw a divine figure behind the poetic hyperlinks to the creation account. Other ancient Jewish literature relied on a similar understanding. For example, early Aramaic translations and interpretations of Genesis 1:1 reveal that many understood the nature of Yahweh’s identity as the word of God.

From the beginning, by wisdom, the son of Yahweh completed the heavens and the earth.

From the beginning, by wisdom, the word of Yahweh created completed the heavens and the earth.

And the earth was waste and unformed, desolate of man and beast, empty of plant cultivation and of trees, and darkness was spread over the face of the abyss; and a spirit of mercy from before the Lord was blowing over the surface of the waters. And the word of the Lord said, “Let there be light,” and there was light according to the decree of his word.

Additionally, ancient Greek philosophers understood the idea of “word” (Greek: logos ) as “the omnipresent wisdom by which all things are steered” and “the divine word received by the prophet, which becomes almost equivalent to God” (George R. Beasley-Murray, John, Volume 36, Word Biblical Commentary).

Ancient Jewish philosopher Philo of Alexandria provided the first synthesis of Jewish, biblical, and Greek philosophy. He identified the logos as a person and fused its understanding with the Hebrew Bible’s portrayal of Yahweh’s divine attributes.

John’s riddle-like introduction of Jesus is strange at first, but Genesis, Psalms, Proverbs, and other Jewish and Greek literature all provide insight into John’s meaning.

In Genesis, creation began with God creating life with his word. This beginning was good, but when God’s creatures reject his words of life, all of creation spirals into death. The world needs a new beginning, so God continues speaking his divine word again and again. This theme continues in Psalms and Proverbs, as God's words of wisdom are poetically continuing to shape all of existence, according to his own wisdom.

John recognized Jesus as the embodiment of this wisdom. Ancient Jewish and Greek literature also interacted with similar understandings about the identity of God and the nature of the cosmos. John weaves all these ideas into a stunning conclusion: the word at the beginning of life has now become human so we can see and know his life personally. We can now relate to the Word that shaped the universe. The Word is a person and he can reshape our lives.

The author of Hebrews further develops this idea.

For the word of God is living and active and sharper than any two-edged sword, and piercing as far as the division of soul and spirit, of both joints and marrow, and able to judge the thoughts and intentions of the heart. And there is no creature hidden from his sight, but all things are open and laid bare to the eyes of him with whom we have to do.”

The Word of God in Our Lives

The word of God became a person, living and active. He knows everything about us—not just because he created us but because he has become one of us. Look at the next verses in Hebrews 4.

Therefore, since we have a great high priest who has passed through the heavens, Jesus the Son of God, let us hold fast our confession. For we do not have a high priest who cannot sympathize with our weaknesses, but one who has been tempted in all things as we are, yet without sin. Therefore let us draw near with confidence to the throne of grace, so that we may receive mercy and find grace to help in time of need.

The author of Hebrews shows us that the living and active word became a human who was tempted like we are and suffered like we do, so he can sympathize with our needs and weaknesses. Because of this, we are invited to keep our words aligned with his (Hebrews 4:14). And since his words are gracious and true, we can be confident and come to him for everything we need (John 1:14, Hebrews 4:15-16). This is how the word of God can actively shape and recreate our lives.

Jesus is called the Word of God in John's Gospel because he is the human embodiment of the eternal word of God who created life at the beginning and is still actively initiating new creation life today. As we listen to Jesus’ words and let them shape and recreate us, we echo his creative words of life and participate in God’s mission to renew all of creation.

Podcast
In the Beginning
Resource
John 1 Study Notes
Video Category
Creación
Previous
Why Does the Ascension of Jesus Matter?
Back to All Blog Posts
Next
Why Is the Lord’s Supper Significant in the Bible?
For advanced bible reading tools:
Login  or  Join
Elige qué idioma te gustaría.