Creation through the Lens of Ancient Cosmology

A Closer Look at Genesis 1

In the beginning God created the heavens and the earth.

This is the opening line of the Bible and a summary statement for all the creative acts God does in Genesis 1. It’s a familiar line of Scripture, but stop for a second—really think. What comes to mind for you as you read that God created the heavens and the earth?

Imagine heaven. What do you see? Clouds? A pearly gate? Golden walls? Are you trying to imagine some mystical, spiritual city where some believe they’ll go after they die? Okay. Now forget all of that. The biblical authors has something else in mind.

The Heavens as “The Skies”

In Hebrew, the word “heavens” literally means “the skies.” (The Hebrew word is pronounced shamayim.) It is the place where birds fly and clouds float. It’s where rain comes from and where stars appear at night. This is why God can say to Solomon, “I shut up the heavens so that there is no rain” (2 Chronicles 7:13), and the psalmist can say, “I consider your heavens… the moon and the stars, which you have set in place” (Psalm 8:3).

Genesis 1:1 could just as accurately be translated as, “In the beginning God created the skies and the land.” The realm where humans live is the land, and the realm above is the sky. As the story goes on, each realm is treated separately, so that even animals are divided up as either sky animals or land animals.

This might feel underwhelming. God is making the plain old sky and land? I guess that’s cool, but it doesn’t seem as exciting as God making an otherworldly place where angels live. But consider that for ancient readers, the sky was enchanting. It was a realm beyond human reach, and it was the place where spiritual beings lived. Ancient thinkers could admire the sky but not experience it first hand. They depended on the sky for water and sunlight, but they could not fathom its reality. From this perspective, God separating heaven and earth meant separating the domain that humans live in and can learn to control from the realm that humans can see but can’t fully grasp. The skies are vast and powerful. They are literally above us—in a position of authority—and we depend on them for life.

With all of this in mind, you can begin to see why the word “sky” became the same word to describe God’s domain, the heavens. The skies are a perfect metaphor for the glory and transcendence of the domain in which God reigns and dwells. Using the same word to mean both “the skies” and “heaven” is more a claim about God’s status and authority than it is a speculation about the physical location of his presence. To say God lives in heaven means that God shares the same characteristics as the skies.

The LORD looks down from heaven On all mankind To see if there are any who understand, Any who seek God. (Psalm 14:2)

Throughout the Bible, the skies are the place where biblical authors talk about God dwelling. But in Genesis 1, God isn’t creating a supernatural place where he lives separate from humans. Genesis 1 is really about God creating the sky above us and the land below us. And as you read on, you’ll find that God comes to dwell in the land with humanity.

The Land, The Sea, and The Pillars of the Earth

The Hebrew word for “the earth” in Genesis 1:1 is ehrets. In modern English, we usually use the word earth to talk about the whole planet, but ehrets simply means “land.” We only recently discovered that the earth is a globe spinning in space. In the ancient imagination, the land is disc-shaped, sometimes called “the circle of the earth” (see Isaiah 40:22).

Go far enough in any direction and you’ll end up at the sea. This is why, in the ancient imagination, the earth is surrounded by chaotic waters, or the seas. The sea is another domain not suitable for humans. You can drown or be eaten alive if you venture too far out. The idea of chaotic waters was an ancient way of thinking about complete disorder, or what we might call “nothingness.”

Here is a diagram of the cosmos as imagined by the ancients. 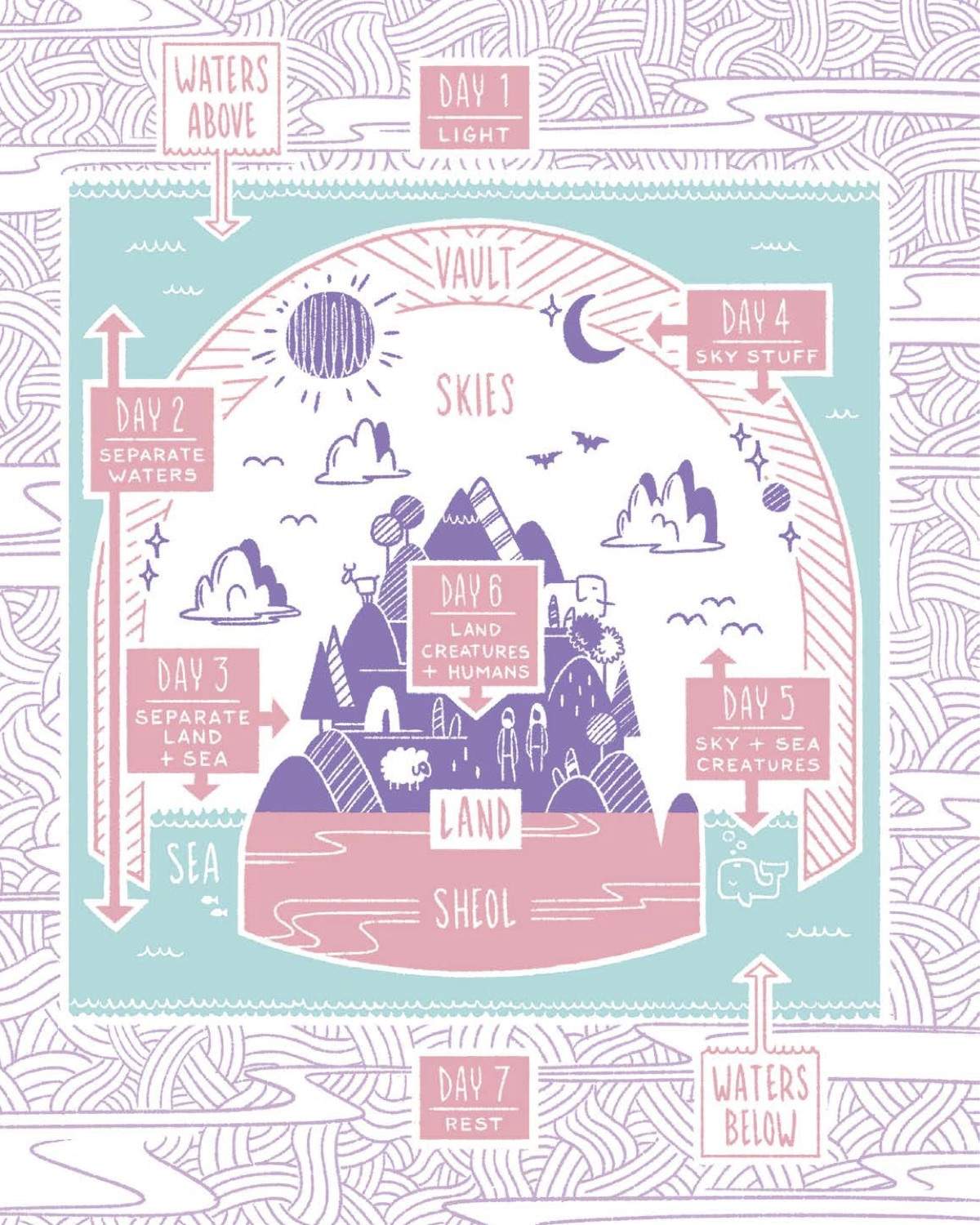 The Purpose of Creation

God’s vision for creation is for heaven and earth to be one. Not for the sky and the land to be one but for God’s domain (the heavens) and our domain (the land) to be united. This is the image we see in the opening chapters of Genesis. In Genesis 2, we read that humans are made in the image of God to rule over the land with him. This is the unified picture of Eden. But in Genesis 3, we see the story of how humanity gave up that calling and was made to leave Eden. This is the tragedy of heaven and earth being ripped apart.

This is why it’s so significant that Jesus ascended to heaven after his resurrection. Jesus is the human who was the true image of God, “who has gone into heaven and is at God’s right hand—with angels, authorities, and powers in submission to him.” With this act, Jesus reunites heaven and earth and restores God’s vision for creation.

Jesus rules with God in the heavens, but the last image of the Bible is that rule coming back down to earth.

Then I saw “a new heaven and a new earth,” for the first heaven and the first earth had passed away, and there was no longer any sea. (Revelation 21:1)

The final image in the Bible is an act of re-creation—heaven and earth made new and unified once more. And notice that there is no sea in this new creation. (Remember, the sea is an image of chaos and nothingness.) This final image is of Jesus bringing together all of creation into a new wholeness and fulfilling God’s ultimate purpose for creation and humanity.

Previous
A Close Look at the Meaning of God's Love in the Bible
Back to All Blog Posts
Next
Is the God of the Bible an Angry God?
For advanced bible reading tools:
Login  or  Join
Elige qué idioma te gustaría.