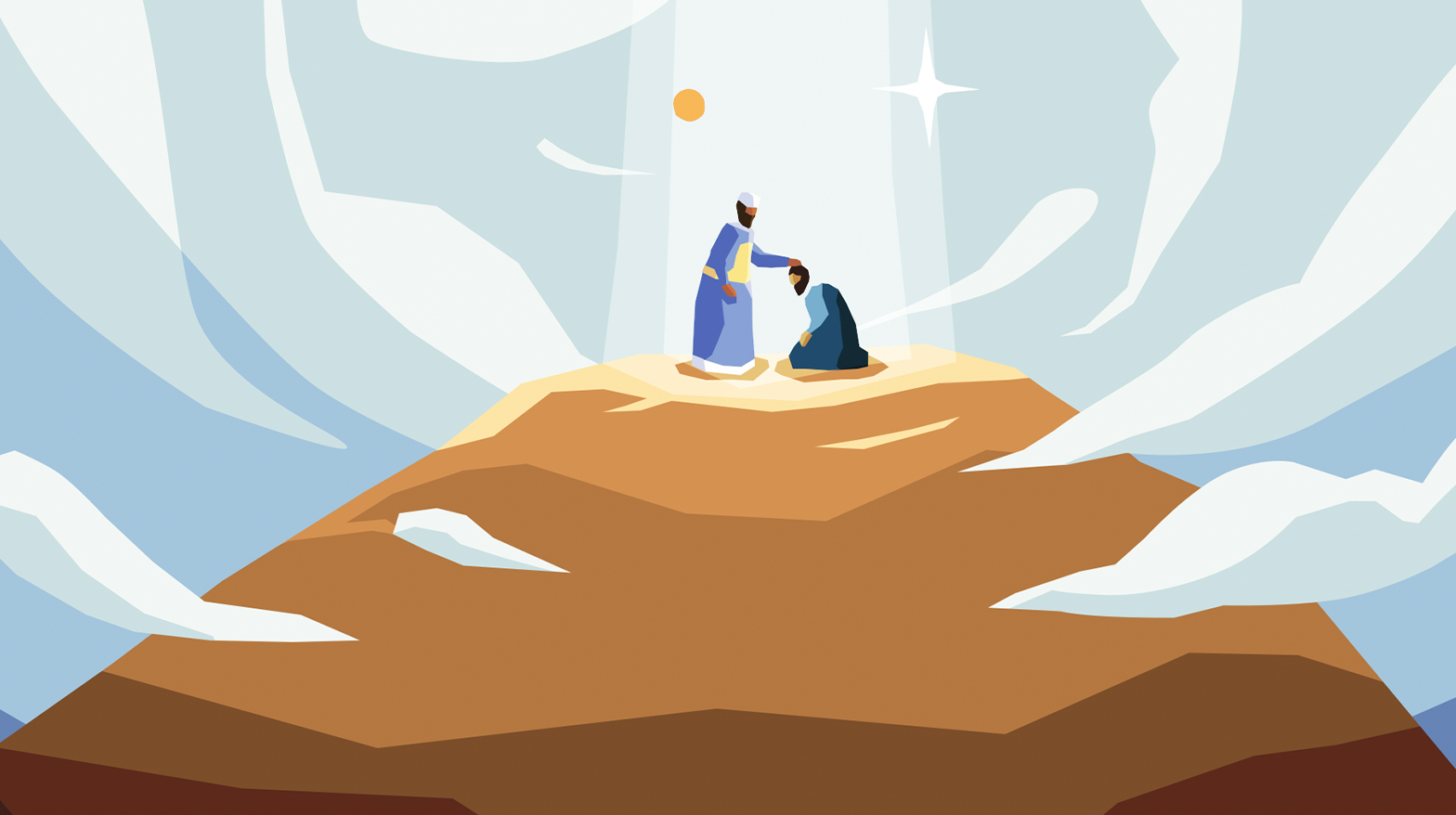 How a Mysterious Royal Priest Points to Jesus

As Abraham is returning victorious from a risky battle, he passes by the city of Salem, and the king comes out to meet him. We’re told that this king is also a priest who serves the same God as Abraham.

We aren’t told why he worships Abraham’s God. He isn’t even an Israelite! We aren’t told his family lineage. We aren’t told very much at all about this mysterious priest-king. When we’re first introduced to this character In the book of Genesis, we’re only given a short story.

Although Melchizedek is a subject of much speculation, this enigmatic historical figure and his royal priesthood serve as a model for Jesus.

Who Is Melchizedek in the Bible?

Let’s take a closer look. Melchizedek is only mentioned twice in the entire Hebrew Bible (Genesis 14:17-20 and Psalm 110:4).

He rules Salem (literally, in Hebrew, Shalem), which later in the Hebrew Bible is identified as Jerusalem (see Psalm 76:1-2, where “God’s tent is in Salem, his dwelling is in Zion”).

Melchizedek is the first explicit royal priest in the book of Genesis. Adam and Eve’s roles as royal priests are implied, but Melchizedek is clearly called a royal priest. And surprisingly, we’re not told that he’s from the line of Seth, Noah, or Shem. What we do know is that Melchizedek is a Canaanite who somehow knows Yahweh. As a “priest of God Most High” (Genesis 14:18, Hebrew, El ‘elyon), he serves the one whom Abraham acknowledges as “the LORD, God Most High, maker of Heaven and Earth” (14:22).

He is understood to be a genuine priest of the God of Israel, but before Israel ever existed and before Yahweh was known by that name (Exodus 3:12-15).

Not confusing at all, right?

So what happens in the encounter between Abraham and Melchizedek in Genesis 14?

When Abraham passes by the city of Salem, Melchizedek comes out to meet him, greeting Abraham with a feast and a blessing. Melchizedek pronounces a blessing on Abraham in the name of El ‘elyon, the Creator/Possessor of the skies and land. His blessing is a recognition of Abraham’s special relationship with God, recalling God’s promise to Abraham in Genesis 12:1-3 that all the families of the earth will find blessing in him.

In return, Abraham blesses Melchizedek by paying him a tithe, one-tenth of what he has (Genesis 14:20). We are then left with the expectation that Melchizedek and the city he rules will experience God’s blessing some time in the future.

While there are many gaps in the narrative, Melchizedek is introduced here to show that Abraham encountered Yahweh in and through a royal priest in Jerusalem long before the time of the Levitical priesthood and long before the time of David. And this encounter establishes the category of a royal priesthood in Jerusalem that will be further developed throughout the story of the Bible.

Melchizedek and the Messiah

We don’t hear about Melchizedek in the Bible again until Psalm 110. Psalm 110 is attributed to David, and in this poem, David speaks of someone else who receives the covenant oath of Yahweh—someone whom David calls “lord,” a common term when addressing a king. We can conclude that David is speaking of his future seed who will receive the messianic inheritance, based on 2 Samuel 7.

In that story, God promises David that this seed (see Genesis 3:15) would come from his line of royal descendants, that David’s royal descendant would build a house for the Lord, and that God would establish this descendant over his kingdom (2 Samuel 7:12-13; 1 Chronicles 17:14). God would be a father to this seed (7:14), so we can conclude that God’s son would rule over a kingdom that would last forever (7:16).

The psalmist depicts this seed as a conquering warrior exercising dominance over his enemies (Psalm 110:1). But in a surprising twist, the psalmist announces that this king will also be a priest—not from the expected line of Aaron but a priest in “the order of Melchizedek.” And the psalmist claims that his royal priesthood will last forever.

Psalm 110 paints a clear portrait of this promised seed, the Messiah who would be a royal priest with both an eternal kingdom and an eternal priesthood.

When we get to the New Testament, the author of Hebrews declares that Jesus is the ultimate king and high priest. Jesus is enthroned above and eternally ruling as king (Hebrews 1:3, 1:13; 2 Samuel 7:16).

And his priesthood? Jesus is compared to Israel's priests from the line of Aaron (Hebrews 5-7). These priests represented Israel before God and offered sacrifices to atone for the sins of the people. However, those same priests were themselves morally flawed and needed to offer sacrifices for their own sins as well as for others. It was an imperfect priesthood and something better was needed.

Jesus was that needed priest—the one who superseded the temporary Levitical priesthood with an eternal one. Jesus didn’t come from the line of Aaron. He was instead a priest in the order of Melchizedek, the mysterious priest-king of ancient Jerusalem. Jesus “did not glorify himself in becoming a high priest” but was appointed by God as “a priest forever according to the order of Melchizedek” (Hebrews 5:5-6; Psalm 110:4).

Remember that Melchizedek is introduced without genealogy and without reference to his birth or death (Hebrews 7:3). This is key. In the ancient world, the legitimacy of a man’s priesthood depended on his genealogy. The author’s omission of Melchizedek’s genealogy implies that Melchizedek did not obtain his priesthood because of his ancestry. Rather, he was literally “made to resemble (Greek: aphomoiomenos) the Son of God, in that he remains a priest forever.”

Jesus’ priesthood is not determined by his ancestry. And Jesus holds his priesthood permanently because “he continues forever” (Hebrews 7:11-28, Psalm 110:4). Because no mention is made of Melchizedek’s genealogical heritage or his death, we can imagine him eternally acting as a priest after the pattern of Jesus.

As the promised royal priest-king, Jesus entered into the eternal priesthood by means of his ascension and heavenly enthronement (Psalm 110:4; Hebrews 8:1-2, 9:11-12). And his eternal priesthood introduces “a better hope through which we approach God,” since “he always lives to make intercession” for those who draw near to God through him (Hebrews 7:19, 7:25).

As the resurrected King, Jesus is currently reigning as the great high priest (Hebrews 8:1). Because Jesus will continue forever as a priest, he is able to deliver forever those who draw near to God through him (Hebrews 7:24-25). Note the complete and far-reaching nature of the word forever! Jesus is able to fully save all those who relate to God through him.

And as an eternal priest, Jesus is always available to intercede for his people. This is the better hope through which we approach God (Hebrews 7:19). Followers of Jesus are free to boldly approach the throne of grace because of Jesus’ eternal priesthood. We can look to Jesus for help in every aspect and moment of our lives.

In every season, at every age, in every glorious high and agonizing low, we can look to Jesus for mercy and find grace to help in times of need. Because Jesus forever reigns as the royal priest-king who always lives to intercede for us (Romans 8:34; 1 John 2:1-2).

Previous
God’s Design for the Growth of the Church
Back to All Blog Posts
Next
How God’s Wisdom Leads to Joy
For advanced bible reading tools:
Login  or  Join
Elige qué idioma te gustaría.